Central government employee? You can claim incentives up to Rs 30,000 – Here’s how

As per an official notification released last month, the central government employees can now get the benefit of one of the recommendations of 7th Pay Commission regarding higher degrees acquired by the working staff.

The notification of the Ministry of Personnel, Public Grievances and Pension, said central employees will get benefits up to Rs 30,000 for acquiring any new degree or diploma.

Earlier the central government servants acquiring fresh higher qualifications after coming into service granted incentive in the form of one-time lump sum amount ranging from Rs 2000 to Rs 10,000. The rates were recommended to be revised by the 7th Pay Commission. 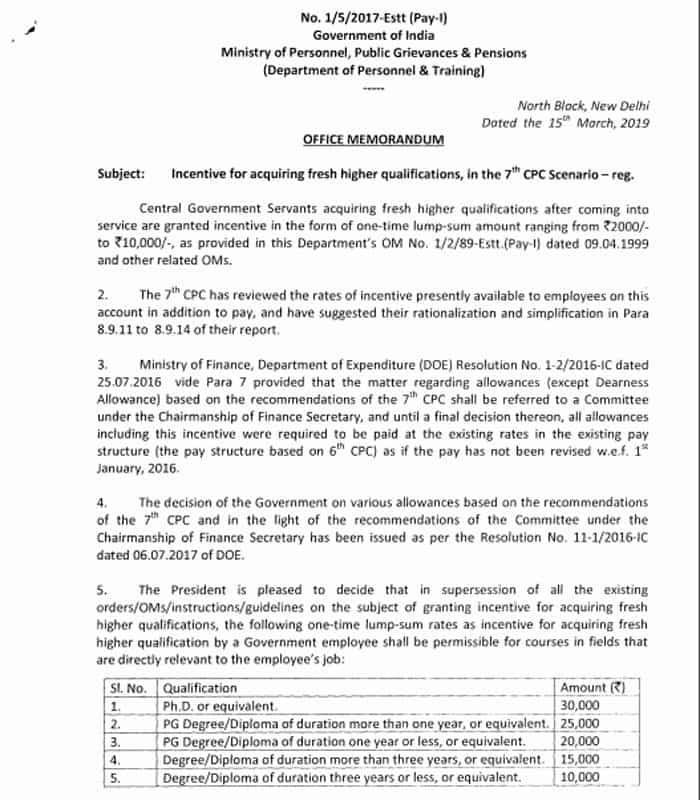 The Department of Personnel and Training has made this announcement for the central government employees. The Department has said that it will give its employees incentives for acquiring higher degrees/diploma after coming into the job. The official notification says that the central government staff will be given the one-time incentive after completing the degree. It will give incentives ranging from Rs.10,000 to Rs.30000.

The notification said that the Government took this decision keeping in view the recommendations of the 7th Pay Commission. For incentive, the higher degree/diploma certification should be completely relevant to the functional requirement of the department.