A post has gone viral on Facebook with the claim that pizza chain Domino’s on its 50th anniversary is giving away a free coupon for two large pizzas to those who share the post.

The post has been shared by Facebook page ‘Dominos’ on Friday. The text with the post reads: “Domino’s is now 50! To celebrate we are giving each share by 7 tomorrow evening a coupon valid for 2 large pizzas! – Domino’s (Please wait 24 hours for your coupon to be sent to you via FB Messenger!)” 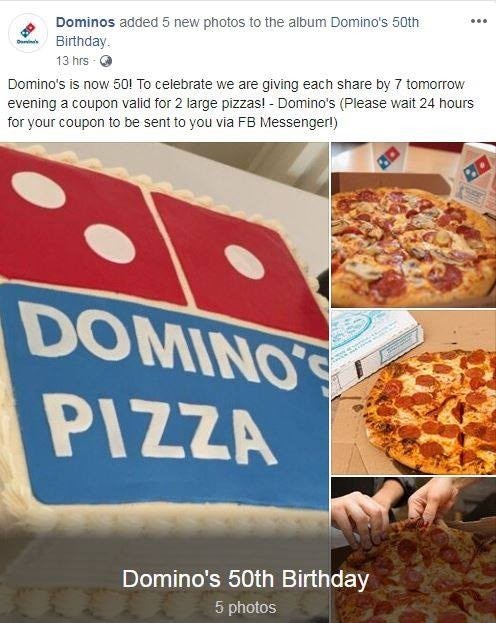 India Today Anti Fake News War Room (AFWA) has found that the post is not genuine. There is no such offer from Domino’s.

Domino’s Pizza was founded in the United States in 1960. So, the claim that the company has completed 50 years is also false.

The post has already been shared more than 6,300 times at the time of filing this story. Believing the post to be true, netizens are sending birthday wishes to Domino’s in the comment section.

Facebook page ‘Dominos’ from where the post was shared is not the official page of Domino’s pizza. The page was created just on Thursday and the name of the page ‘Dominos’ is also misspelled.

Scanning the social media profiles of Domino’s Pizza, we couldn’t find any such information regarding the offer. Had there been any such offer, the official Twitter and Facebook accounts of Domino’s would have certainly mentioned it.

The customer care of Domino’s India also confirmed to us that no such offer was put out.