Google OnHub review: Routers don’t have to be so complicated 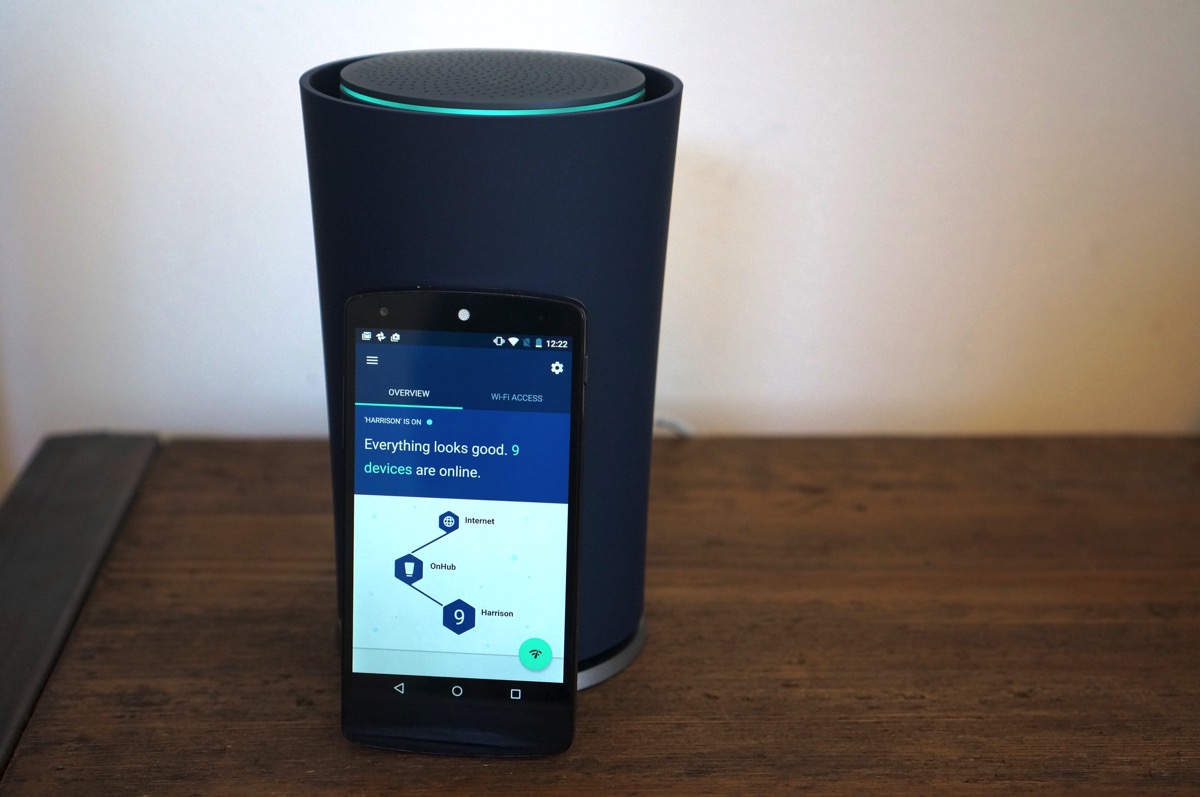 If you’re like me, a cold feeling of dread grips your heart every time your internet goes out. “Is Comcast down,” I ask myself, “or is my horrible router misbehaving yet again?” This usually follows 10 minutes of unplugging and then plugging things back in, waiting and hoping for your internet connection to be restored, because there’s no easy way to troubleshoot otherwise. And that’s not to mention that setting up a router or completing a simple task like renaming your network or changing its password is usually far more of a chore than it should be. There has to be a better way.

Google believes that its new OnHub wireless router is a step forward. Made in partnership with TP-Link, it’s a powerful, intelligent and, yes, beautiful home networking device with a high price to match. Google is betting that the combination of ease of use and attractive design is the path wireless routers need to follow — but those features come at the expense of others you’d typically expect from a $200 router. The question: Has Google made the right trade-offs to justify the OnHub’s price?

Google’s OnHub is missing some of the advanced features found in similarly priced routers, but it makes up for that with excellent, powerful hardware that looks good in your home and a great app that makes setup, maintenance and troubleshooting easy. The trade-off should be worth it for most consumers — if you’re tired of dealing with the horrible software and ugly hardware that most routers feature, the OnHub is an excellent option.

The premium experience Google is shooting for here starts before you even get the OnHub out of the box. The packaging is thoughtfully designed; it reminded me of unboxing an iPod in the days of yore. Certainly, it’s the most elegant non-Apple router unboxing I’ve ever encountered.

And then there’s the OnHub itself: a cylindrical tube that’s ever so slightly wider at the top than at the base. A removable plastic shell (available in blue or black) snaps into place surrounding the guts of the hardware, all of which are encased in the gray tube, which that shell hides away. A little bit of the tube peeks out over the cover, with an LED ring surrounding it that immediately brings to mind the ill-fated Nexus Q music and video-streamer. There are no sci-fi antennas or hard angles to be seen here. Google even included special flat Ethernet cables that can easily wrap around its base to be more unobtrusive. It is, without a doubt, the nicest-looking router I’ve ever used.

But who cares? This is something you’ll set up and hide away and hopefully forget about, until it misbehaves, right? On the contrary, Google designed this router so you’d be inclined to place it out in the open, hopefully on a high shelf somewhere. That’s because Google believes the most important thing it can do to improve people’s WiFi experience is making a product they won’t want to hide away in a closet. Mission accomplished: I’ve typically obscured my ASUS router behind my TV, but I have no problem displaying the OnHub on my media stand.

The thoughtful design isn’t restricted to just looks, either — Google picked a cylindrical router to help aid with signal distribution. Around the inside of the cylinder are the 2.4 and 5GHz wireless antennas; three pairs of antennas for each band are evenly distributed around the cylinder, and there’s another large 2.4GHz antenna built right into the casing itself.

The rest of the OnHub’s guts are about what you’d expect for a router in this price range: It’s an AC1900 device that covers all 802.11 bands in use at this point (a/b/g/n/ac, if you’re counting). Its WiFi radio can detect congestion and move devices between the 2.4 and 5GHz bands for optimal performance; there’s no need to set up an additional 5GHz SSID as many routers do these days. Google even included support for Bluetooth, Weave (Google’s Internet of Things protocol) and the ZigBee local wireless networking standard, even though they don’t do anything yet — Google says it can enable them in future software updates. That’s part of the whole OnHub concept: a router that can get smarter and better as years pass.

Google did leave out a few things that are generally table stakes for a router in this class. Notably, there are only two Ethernet ports: one to plug the OnHub into your modem, and one to use for wired internet. Most routers in this price range include four ports for hooking up wired devices. Google’s clearly looking at that as a legacy feature that doesn’t have a place in our modern, wireless world — something that fits with Google’s larger ethos. It didn’t bother me, but it’s definitely something to be aware of. Additionally, the single USB 3.0 port is essentially useless. You can’t hook up a networked printer or hard drive here; its only purpose is for USB recovery if the internal software gets horribly corrupted. If you’re a power user who relies on more Ethernet ports or USB connectivity, you’ll need to look elsewhere.

If distinctive, elegant hardware is one of Google’s major tentpoles for OnHub, equally elegant and intuitive software is the other. Nearly every router out there has simply atrocious software; even doing basic things like setting a password or changing the name of your network can be a real hassle for the average user. Google’s gone in the opposite direction and crafted an interface that’s simpler than any I’ve ever seen — but again, it’s at the expense of features that power users might crave.

The first thing to note is that everything on the OnHub is done through the Google On app on your mobile device, available for Android 4.0 and iOS 7 or higher. Google told me that it will eventually offer a simple web interface for setting up the OnHub, but at launch, a smartphone or tablet is required.

The setup process is incredibly simple, particularly if you’re using Android. Once you download the application and log in with your Google account, just tap the “add new OnHub” prompt to start setup. The app will detect if there’s an OnHub nearby that’s in setup mode; once it finds the new OnHub, your phone will prompt you to move right next to the router. That’s because the OnHub will then play an audio tone that’s used to pair the router with your phone and your Google account. Once your phone recognizes the code, you’re prompted to enter a network name and password, and that’s it. You wait a minute or two, and the OnHub should be good to go. (You’ll know it’s up and running when the LED ring stays blue.)