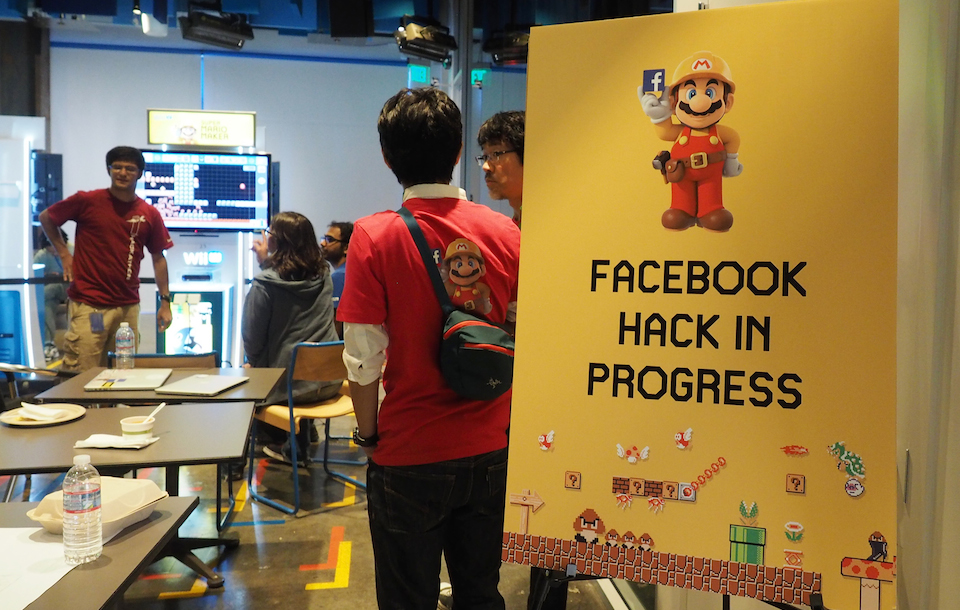 When I entered the doors of the building, an approximately 7-foot Piranha Plant greeted me. Inside, I saw large question block cushions scattered throughout and 25 Wii Ustations. Off in the corner was a Mario mascot, posing for photos in front of a big green pipe. If you thought I was in Nintendo Land, you’d be wrong. I was in Facebook’s Menlo Park, California, offices. It was the second day of a two-day hackathon collaboration with Nintendo, where employees had the opportunity to create levels with the upcoming game Super Mario Maker. And the ultimate prize? The winning level design would be available to download when the game launches.

Of course, the event isn’t quite a traditional hackathon — you don’t need special coding skills in order to create levels in Super Mario Maker. But it was a chance for Nintendo to open up the game to at least a small sampling of the public ahead of launch.

Over 100 Facebook employees participated in the event and by the end, over 40 levels were created. When I arrived, much of the hackathon had already concluded, but I could see that employees took level creation seriously. Many of the teams storyboarded their levels on whiteboards, even going so far as to draw up blueprints of bricks and coins and plot out jump points with Post-it notes. The only real rule — and this is true for the consumer version of Super Mario Maker as well — is that you need to be able to beat the level in order to submit it. In the regular game, the user-created levels are also vetted by Nintendo moderators to determine level difficulty before it’s available for anyone to download. You can also share specific levels with friends by giving them a code.

That, however, doesn’t mean the levels were easy. “Some are so mean!” said Corey Olcsvary, a Nintendo product expert who was one of the hackathon judges. He was telling me this as he was maneuvering Mario through what seemed like a hellscape of rotating fire bars and falling Thwomps [the large, spiky cinder blocks]. “I’ve seen a really crazy combination of enemies. There was one squid level that was just Bloopers everywhere!” he said. So what are the judges looking for in a winning level? “We’re looking for a representation of Nintendo’s core values — creativity, fun and surprise — as well as Facebook’s core values, which is: Move fast; be open; and break things,” said AJ Glasser, a manager for Facebook’s games partnership program.

While I wasn’t able to watch or play all of them, I walked with some of the judges as they played through the different submissions. Several of the levels I saw recreated the Facebook logo or spelled out “facebook” in coins and blocks, while others took the “Move Fast” motto to heart, forcing the player to speed through conveyor belts and avoid getting smashed by flying cannons.

“I think it’s great,” said Brandon Dillon, an Oculus software engineer who also participated in the hackathon. “Especially as a game developer, it’s interesting to look at how Nintendo thinks about constructing levels.” In many ways, he says that Super Mario Maker‘s dead-simple controls — you only need to drag and drop different elements to create a scene — is an idealized way of doing game design. “But more than that, it’s got so much polish and love and charm,” he said. Dillon was part of a team of three people from Oculus, and their level was called “Bowser’s Timeline.” The idea is that you would play through Bowser’s Facebook page, navigating through his minions wishing him happy birthday and whether you want to accept Bowser’s friend request.

When asked if he played other levels, Dillon admitted that some of them were more than a little hard. “There are people who made some pretty sadistic levels!” he laughed. “I consider myself a competent Mario player and I couldn’t even get past the first screen of some of them.”

After two days and several hours of judging, a winner was crowned. Created by Doug Strait and Roy McElmurry, both Facebook software engineers, the level was called “Ship Love.” It takes place on a pirate ship, with coins shaped into hearts; Yoshi as your trusty companion and Bowser as your final obstacle at the end. Curious to see what they whipped up? You can either check out the video below or try it for yourself when Super Mario Maker arrives in North America on September 11th.